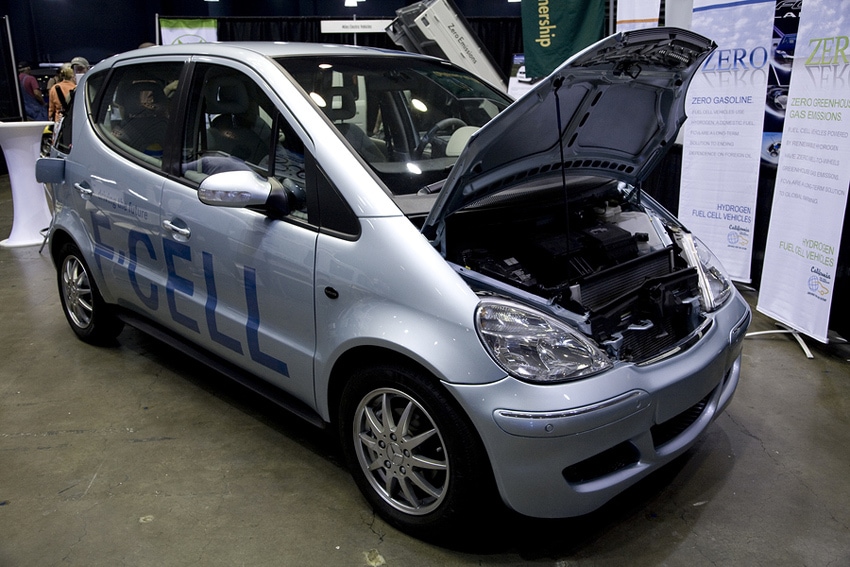 Tesla’s success with battery-powered electric vehicles (EV's) has drawn the public's eye away from Fuel Cell Vehicles (FCV's). However, manufacturers like Toyota continue to invest in the FCV technology. Toyota has invested in FCV’s, so what do they know about FCV's, and what's holding back other manufacturers from using the technology?

How do Fuel Cell Vehicles Work?

As the Department of Energy (DoE) explains on fueleconomy.gov, fuel cells create electricity from hydrogen and oxygen. A platinum catalyst splits positively charged ions from hydrogen atoms. These pass through a membrane before combining with oxygen to make water. The remaining electrons from the hydrogen provide a small amount of electricity. Combining fuel cells into a “stack” produces enough energy to drive the motors on an FCV.

An FCV then, can be considered an EV without batteries, although it does need to refuel with hydrogen. The benefits as compared to an EV are no lengthy recharging times or “range anxiety,” and zero emissions from the vehicle or the electricity production system.

One factor holding back FCV's is the lack of hydrogen refueling stations. The Alternative Fuels Data Center website shows just 24 in the US. There’s also little in the way of a hydrogen distribution and refueling infrastructure, despite the DoE’s efforts. This seems odd when you consider the size of the hydrogen industry.

Hydrogen is used in industries as diverse as food manufacturing and oil refining. Global production is estimated at 650bn Nm3, (Normal cubic meters,) but most of this is produced on-site, where it's needed. The main production methods used today are reforming, (used for high volume production,) electrolysis and coal gasification.

Many small scale producers end up using electrolysis which, while not the most economical method, avoids the challenges and expense of distribution, all of which stem from hydrogen's basic properties.

Hydrogen boils at −252.77°C and as a gas has very low density. That makes it difficult to store and distribute because it takes a lot of pressure to compact it to a manageable volume, and extreme cold to turn it back to a liquid. Pipelines are generally the most economical method, but even then pumping costs can be high. It’s also very flammable, so leaks cannot be tolerated.

With storage and distribution being so difficult, local production clearly has attractions, providing costs and safety concerns can be addressed. One of the most promising future technologies is production using sunlight (photo-electrolysis or solar-powered electrolysis). This is a “green” production method and dispersed small-scale facilities could largely eliminate the need for a distribution infrastructure.