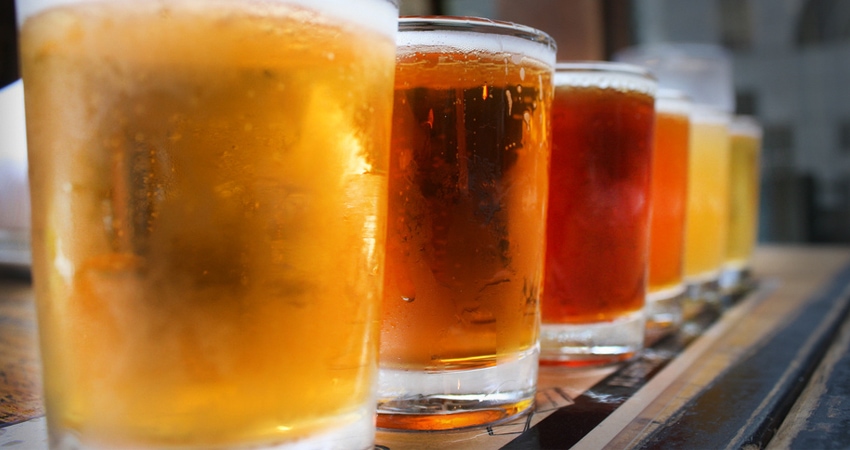 At the last count the US had 4,269 craft breweries, of which 2,397 were classed as microbreweries. A microbrewery is defined as an operation producing less than 15,000 barrels per year and selling more than 25% of that off-site. One barrel holds enough beer to fill around 330 12 ounce bottles so a brewer could fill nearly five million bottles a year yet still qualify as “micro.”

To complete the picture, there are also 1,650 brew pubs, (places that brew and sell mostly on-site,) and 178 regional breweries. A regional produces more than a microbrewery but less than 6 million barrels per year. So without doing any math it's apparent a lot of breweries are filling millions of bottles with a glorious array of traditional and innovative new brews.

Brewing isn't the most visual of processes. Grain goes in and becomes wort that gets boiled with hops to create flavor. The resulting liquid is then chilled, fermented and stored. This all takes place in large tanks, usually stainless steel, linked by pumps and piping.

As with all food production, cleanliness is paramount. In the case of beer, any contamination could taint the product and result in a wasted batch. Accordingly, brewers are obsessive about cleaning their process equipment, using steam and/or caustic methods as appropriate.

Bottles are washed to ensure cleanliness before receiving their 12 oz of beer, This is transferred from the holding tanks through more steel piping to the filling machine, often a rotary device that provides a foam-free fill while still meeting the required cycle time.

Just as in the actual brewing process, all this equipment needs regular flushing and cleaning. No one wants an IPA that tastes of stout, and no one wants a bad bottle of beer!

The importance of monitoring flows

Brewing consistent, high quality beer demands careful regulation of time and temperature. In some parts of the process these are governed by the rate at which the liquid flows through the system. A partial blockage will reduce the flow, resulting in the product being exposed to temperatures that are too high or too low. (It might also damage pumps and cause overflows elsewhere.) In bottling a flow obstruction could result in under-filled bottles – a very serious issue for consumers!

A flow monitor, like those made by ChemTec, is a device calibrated for a target flow rate. If the flow moves outside set limits the monitor responds with an alarm signal. This could be used to light a warning lamp or shut down a pump, avoiding defective product and equipment damage.

ChemTec flow monitors, like those in the FS and LPH ranges, are simple yet effective. A small magnetic piston is suspended in the flowing liquid. A sensor outside the stream detects the change in position resulting from a drop or increase in flow.

An extreme example of flow monitoring is the excess flow valve. These are designed to shut off a flow if an uncontrolled release occurs, as when a pipe breaks or a hose is pulled free. Mandatory in some fuel handling situations they could also help a brewery protect itself against accidents and mistakes.

Flow monitoring is a specialized area where every solution is tailored to the fluid concerned. To learn more about how flow monitors could benefit the brewing and bottling industries, contact a ChemTec specialist.